I love those little steamed buttery caramel cupcakes sold at the stalls in KL, Malaysia during teatime. I have always wanted to make them by myself. First time tried, it was not so successful. Now, after a year’s gap, tried making them again. This time, it was a great success. Hubby wouldn’t stop eating them. He told me to make another batch for Mahisha's nursery's potluck party the next day. Made them, and everybody liked the cakes as well.

What do we need:

Combine the wet ingredients to the sifted flour mixture. Whisk gently until it is lump free. Pour the batter into greased little moulds until 3/4 full. Steam on high for 15 minutes. Let the cupcakes cool. 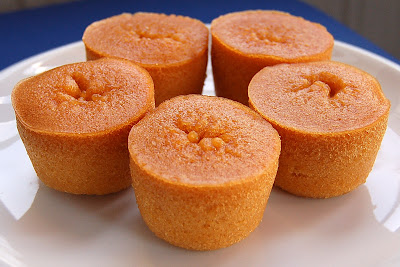 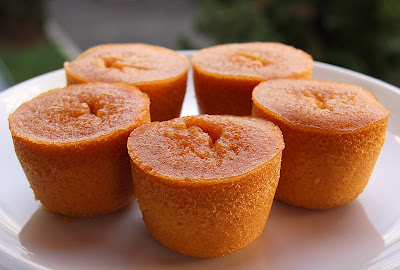 Wow, they look wonderful! I can understand why your hubby could not stop eating them ;-P...

Hi Pushpha,
Welcome back!!!!! Cup cake looks wonderful!!!!Thanks for sharing.
How is your Little boy??

Steamed cup cakes! That is very creative and they look fabulous:))

Lovely looking cup cakes. Thanks for sharing your recipe.

Hi Pushpha,
Your measurement for butter is usually in cup. How to measure solid in cup?

Thank god you are back, I missed you!

i love caramel and your steam cupcakes look very yummy! This recipe is going to be on my to try list!

Oh my.. the baking genius is back!! Hi, my name is Angela and I am an addicted fan of your blog. While you were away I treated my family to a few of your goodies and boy were they happy!!!The moist chocolate cake and the choc cheese cake were absolute hits. Thanks for making baking so easy. And now off to some steaming..
Thks Pusha for your passionate blogging. Oh yes and congrats on your baby boy! You ought to have your hands full now!! ANGELA.

Pushpa,
I tried it put yest but the caramel hardened before I even added the hot water! I just melt it again in the microwave & it wasn't like the syrup form you mentioned in your recipe. Mine was solid when I added in the butter,sugar. I threw away the hardened part & made do with whatever caramel was left. hahaha. I couldn't taste the caramel..more like the manku kueh if you know what it is. Its the colour cakes u eat with red sugar..Sells at pasar malam. Must try again...

looks so clean, so simple and yet so warm and inviting.

Rosa- Thanx a lot. U can imagine eh?

Kribha- Thanx to u too. My pleasure.

Wendy- Butter is not 100% solid. It is actually semi-solid. Soften the butter & fill ur measuring cup. U can use a kitchen scale if u have one. About 120g would make 1/2 a cup of butter. HTH. Btw, where r u writing from, Wendy?

Shankari- Thank god Im back. I missed blogging & all my fellow bloggers too!

culinaryprincess- Welcome to the blog & thank u. Do let me know of the outcome.

Angela- Gosh... Uve made me feel so proud. Hey, thanx a lot for the praising. Very happy to know tat all my effort do pay back. Where r u living, Angela?

Komala- So, u did try eh?
Ok, 1stly, u dont have to use yeast. Baking soda wuld do the leavening job well enuf.
2ndly, the caramel will harden as soon as u pour in the boiling water as the temp of the caramel is far higher than the boiling water. Just return it to the stove & continue stirring until the hardened caramel dissolves completely. Now, uve got ur caramel syrup done!!! Give it another try & come back to me. Good luck.

big boys oven- welcome to the blog, boy. Thanx for the compliment.

happy cook- Many thanx to u.

Lakshmi- Welcome to the blog. Thank u.

Thank you for stopping by my blog. Ur caramel cupcakes look so lovely. Instead of using baking soda, can I use Baking powder?

wow..you have a great blog here...and that too with a little one you are dong these...amazing...thanks for sharing..

OMG! You're back and I didn't even know it!!
It's great to see you back in the kitchen with more dessert recipes :)

Hi Puspha,
Thanks for your reply about the measurement for butter in cup size.
I am from Singapore, over here we normally measure butter in gramme

Hey I didn't know you were back. So good to see you dear :). Very nice cupcakes...Didn't know we can make cupcakes like this also.

This one lovely Pushpa. Love to try. But i don't think, i can omit egg in this :) Viji

Thks for your reply Pushpa. I live in Kuwait. A very happy birthday to Mahisha. I'm sure she loved the great spread.
There's a lot of baking these days at my home due to shorter working hours in Ramadan.. on Sat I made your coconut buns (they were haunting me ever since I saw your pics). I do follow your recipes verbatim as they are pretty successful, however this time I noticed you mention just add the 'active' yeast to the flour (no proofing? or should it be 'instant' yeast) I did that and after hours it stayed just that way. I had to dunk it in the bin. But since I had the filling ready I did it again with the usual yeast-in-liquid before adding to the dry ingredients and the buns turned out yumm..
Sorry to nitpick and this long msg but feedback is good heh!?
Thanks for sharing. ANGELA

Retno- Thanx to u for dropping by too. Yes, u can.

Srivalli- Welcome & thank u. Itz my pleasure of sharing.

Nabeela- Yes, I am back. Good to c u here again.

Wendy- Ic. Well, the purpose I have used cup measurement in the blog is coz I suppose not all my readers have a measuring scale but am very sure tat everyone has a cup.

Shilpa- Itz good to b blogging again too, dear. U definately can!!!

Viji- Thanx. I doubt so.

Angela- Thanx for the wishes.
About the yeast, it is dried active instant yeast. Active yeasts r always instant yeasts. Using fresh yeast is just the same. No matter watever yeast we use, the dough wuld definately has to go thru proofing. Anyway, I am very glad tat the buns turned out well.